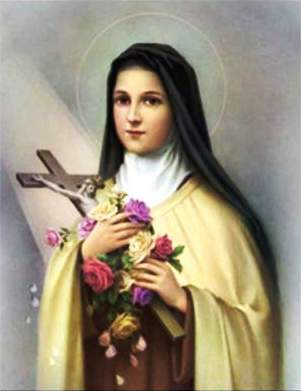 St. Thérèse of Lisieux
1873 – 1897
Marie-François-Thérèse Martin was born on January 2, 1873, in Alençon, Normandy.  She was the ninth and last child of Louis and Zéle Martin, a deeply religious couple.  They lost two girls and two boys to infant deaths, so the family consisted of five girls.  Upon her mother’s death in August 1877, the family moved to Lisieux, Normandy.  On December 25, 1886, Thérèse had a religious experience that she described as “conversion”.  In Lisieux, there is a Carmelite convent for cloistered nuns and one by one each of her sisters entered the cloister.  Thérèse was left to care for her father who suffered his first stroke.

At the age of fifteen, Thérèse wanted to enter Carmel.  She first met with the Bishop and then went to Rome to beg the Pope.  She entered Carmel on April 9th, 1888.  On September 8, 1890, she took her vows and was given the name Sister Thérèse de ’L Enfant Jésus et de la Sainte Face, (Sister Thérèse of the Child Jesus and the Holy Face).

Thérèse lived the ordinary life at Carmel in an extraordinary way – her “little way” as she would call it.  The “little way” was a life of kindness and charity to all.  When she became ill with influenza in 1894, her sisters asked her to write about her life – they knew she was near death.  Thérèse was so sure of God’s love for her, she called herself “God’s Little Flower”.  She died on September 30, 1897.  In 1898, her sisters published her story – “The Story of a Soul”.  She was canonized a Saint in 1925, and is the patroness of the missions.  In 1997, Thérèse was declared a Doctor of the Church by Pope John Paul II.